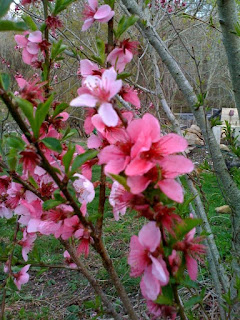 The peach tree came alive this week. It’s so early, with the late-April heat wave, it caught me by surprise. Just as Hunter did when he jumped on his two wheeler and pedaled away today. When did you learn how to do that? Wasn’t it just yesterday that you were afraid to even try?
But that is precisely how this whole entire spring is going: too fast. All quiet, lonely winter long, I ached for sunshine and green and growth, for sports, and the playground, and planting. And here it is, and it is so here, I am so in it, that I am missing it. I am tired and achy from gardening. I am pulled in many directions. I am trying to round up the sheep, who are out because children have climbed over the gate which I have told them repeatedly NOT to climb over, and the dog is chasing the sheep and the kids are chasing the dog, and between all the baa-ing and barking and giggling, I am quite sure I am going to lose my mind. And I yell at the kids. Too much.
Something my step-mom said one Christmas comes to mind. It was a few years ago, when all the cousins were babies and toddlers and the favorite game was chasing each other around the house and screaming. My step sisters and I were tight-lipped and tired of repeating ourselves. The Dads had escaped to check out Grampy’s new snow blower. Mary waited for a lull in the chaos and cornered the three of us, sipping wine from glasses clutched protectively in two hands, up high, out of the reach of jostling limbs. “Some day you will miss this,” she said simply. “All of it.”
Even on that cacophonous Christmas day, I knew exactly what she meant. You look at your three year old, and can barely imagine that drooling, clapping nine month old you have pictures of. Then he’s 5 and going to kindergarten and you honestly don’t know how you got here. Where did that three year old go? Just a second ago he was upstairs, refusing to use the potty and drawing eggs on the wall with a red sharpie.
So when Hunter asks me to watch him on his bike for the millionth time today, and I have a mountain of laundry waiting for me on my bed, and dinner needs to be started, and eggs need to be collected, and I am tired and dizzy from the passage of time, I remember that he is a child. A loving, generous, bicycle-obsessed child. Who can no more control his locomotor impulses than that nine month old just learning to walk, pulling himself to standing over and over again in his crib. Who has starting saying things like, “If you were wondering where I was all that time, I was upstairs folding laundry.” He really was. Not even his own. And I watch. His hair is growing out and curling up at the ends a bit. It gives him a wild look. As he makes his way in unsteady circles around the yard, I notice how muscular his calves are, how broad his shoulders have become, how the afternoon sun illuminates his golden curls. I catch a glimpse of the lanky teenager he will become, no longer riding in circles, but purposefully away. And that is the best case scenario, my morbid mother mind reminds me.

So when I feel myself ready to go rooster on him, I don’t fluff up my neck feathers, don’t whip out the spurs. I think, What if, for even one second, he listened to you?
He did just what you asked him to. He didn’t fight with his brother, or leave his sneakers out in the rain, or wear that shirt with those pants. What if his fascination with poop jokes ceased abruptly, and he always finished his dinner (even his eggplant), brushed his teeth, and just did his homework right when he got home from school? What if he stopped negotiating for a later bedtime, or more time playing Wii, or a day off from school? And he didn’t do that uncontrollable giggle thing when he was overtired? What if you never heard about another Lego Starwars game in excruciating detail, or one of his silly little made up songs? He stopped asking why, and didn’t talk back? What if he became quiet and still, and stopped bouncing, and wiped that smile off his face, and lost interest in jumping from that place that is WAY. TOO. HIGH.
And wasn’t growing up so god damned fast?