i'm in love with how you feel

It's a steamy August night, the kind that inspires smoothies for dinner, sipped languidly, floating in the pool. Because it's summer on Martha's Vineyard, our tiny house is crammed with friends, both local and of the off-island variety. We're pressing sweaty beers to our foreheads, barely mustering up enough rowdiness to hear each other over the hum of the fans and the cicadas. All of us, that is, except for you.

You are a whirling dervish of activity in front of the Vulcan stove. You've got three burners going at full force- sterilizing jars, blanching snap beans, and jelling wineberries. There is an obvious rhythm in your madness, you are neither flustered nor confused, you are simply fully present. You are not worried about getting the kids to bed, about how best to adjust their sleeping schedule to accomodate the impending start of school. You don't fret over the frizz in your hair. You aren't afraid someone will snap an unflattering picture of you and post it on their Facebook page. As a matter of fact, I don't think you are afraid of anything.

Except, maybe, not having enough jam and pickled snap beans.

I could speculate on the source of your ever-present drive, your constant motion, your preoccupation with preparation. But not tonight. Tonight, I will simply admire your sultry culinary manuevering, you worker ant-ness to my grasshopperly ways. And if I can't stay completely in this moment, then I will look forward to winter mornings, when our house will seem too big and empty. But we won't be lonely at all. We will savor our wineberry jam on freshly baked bread, and each other, over a friendly game of scrabble.
Posted by Kate at 10:10 PM 2 comments:

The processing of chickens 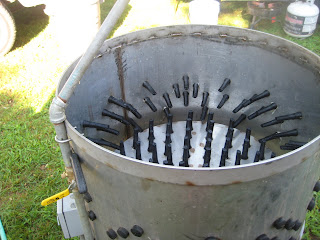 Last weekend I had to decline an invitation to an off-island birthday party, due to the impending "harvest" of our meat chickens. Yes, that is a euphemism for slaughter, and yes, I stole the term from Barbara Kingsolver's book Animal, Vegetable, Miracle. It's just a nicer word, though, isn't it? And it really is similar to harvesting veggies in many ways. Aside from, you know, the blood and stuff. Anyway, my mainland friend bestowed upon me the Most Unusual Excuse Award, and is looking forward to a visit to the farm in the near future. Although, I suspect she's happy to have the chicken harvest over and done with before she arrives.
Which leads us to the real question at hand: why the heck did I want to be a part of this so-called "chicken harvest"? Okay, so I didn't exactly do the deed myself. We arranged for the Mobile Poultry Processing Unit (MPPU) to come by and handle things for us. I know many people prefer not to think about the journey their meat has taken before they come across it, neatly shrink-wrapped in their local market, so I'll spare you the most gruesome details. But I have to say, the details weren't really all that gruesome. I was present through the whole process, as were my kids, and even my mother-in-law -who likes to think that big steaks start out as baby steaks, born in the back room of the supermarket. Not one of us was traumatized, or even grossed out. The MPPU crew members have done this so many times, that the "moment of truth" is quick, and free from the chaos and drama traditionally associated with chicken beheading. In a matter of minutes, the birds were being shrink-wrapped in their own neat packages, worthy of any supermarket meat case.
In all fairness, I very well could have attended the party, for all the work I did (read: didn't do) in preparing for, carrying out, and cleaning up after the harvest. But at least I was there. Is it weird that I wanted to be there? Sometimes I get the feeling people think we're a little weird. I suppose we are. But even if I'm too much of a chicken (sorry, I couldn't resist) to actually do the harvesting myself, I want to be there, expressing my gratitude on some level. Showing respect, I guess.
Yup, I sound like a freak. I guess I haven't figured it all out yet. There are a lot of grey areas for me, having come into this farming thing as adult, and only a few years ago at that. I just know that I'd rather eat an animal that has had a happy life, whether it was on my farm or running around in the Chilmark woods or flying over the plains of North Dakota, than one produced in a factory farm. And if some part of that animal's life (or death) is too gory or disgusting or upsetting for me to witness, well, maybe I shouldn't be eating it.
Posted by Kate at 7:57 AM 1 comment: