O Tannenbaum (or, Have Yourself a Sappy Little Christmas) 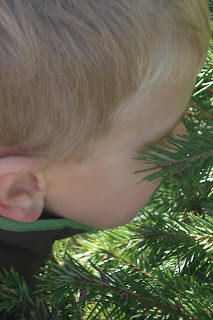 You guys asked for pictures, so here's a picture of our resident tree expert choosing our Christmas tree. Yes, he makes his decision based on smell, and no, no one questions his judgement.


Is there anything more intoxicatingly festive than having a tree, an actual green, sap-dripping, pine-smelling tree, in your living room? Forget the lights and the ornaments and the bingle balls and who-foo fluff (uh oh, someone's been watching too much Dr. Seuss already), the smell of it alone is enough to make me joyful and triumphant.

But then, because it's Christmas, and because I do have a tender and unyielding love of all things shiny and glittery, we trimmed that tree like nobody's business. We oohed and aahhed over the ornaments: the hand made ones, the picture frames, the various farm animals, the big red ball. The kids hung theirs all together in a little clump, like they do, but didn't notice when I quietly rearranged them later. We listened to the same Christmas songs we listen to every year, and they were touching and magical all over again.
It was one tiny little day of our lives. And not even a holiday or milestone kind of day. Just a day to spend together, loving up our perfectly perfect tree.
Posted by Kate at 9:03 AM No comments:

On thanks and giving

I had the most wonderful of Thanksgiving weekends, the kind that goes by really slowly, and you have time to savor all the friends and family and treats and trimmings. The kind that allows for playing games with the kids, and catching up with your sister over a beer (or several beers, and then some chips and dip), and even laying on an ice pack when one false move re-invigorates last winter's once forgotten back injury. We revelled in the children's art projects and gratitude ("I am thankful for the erf and the trees and my family, " read the feathers on the paper turkey.) We relished the fruits of the numerous feasts. Farming gives one a deeper appreciation of food, even when it isn't something we produced ourselves. That turkey from the supermarket was still once a proud, gobbling creature, those veggies tiny, hopeful seeds. We even started distributing holiday gifts- mostly of the "self-produced" nature. And I don't mean egg-carton ornaments. I mean food. Hard earned food.

My dear husband, who is generous to a fault, surprisingly hates Christmas. It's not the giving, of course, or the travelling (although he'd like to let you believe that), it's the big fat ugly head of commercialism, which tries to disguise itself as a jolly old sweet elf, and shoves itself down our throats from early November through the end of the year. It is tv ads which portray husbands giving their wives BMWs and diamond tiaras. It is the relentless toy companies, sneaking their products into magical scenes, conditioning us to think that "happy" = "stuff".

It's not that we're Holy Rollers, who want everyone to remember to keep the Christ in Christmas. If anything, we're sort of privately Pagan, and would actually change the name of the holiday in our family, if we didn't think it would confuse our kids so much. "No, honey, it just looks like a Christmas tree, but this is actually a 'Solstice tree'... " Anyway, we're basically anti-"stuff", and are trying hard to raise kids who don't measure their worth by the size of the present pile.

Did I mention we are also both allergic to malls?

So, our survivalist, farming, food-hoarding ways really help us out in our endeavor to redefine Christmas. The aforementioned husband, who has been known to return from November scalloping, soaking wet and bordering on hypothermic, and declare, "I'm not giving ANY of these away. To ANYONE!", gleefully stuffs coolers with said bivalves, along with pork and venison and yes, even elk. How easily he fills gift bags with the highly coveted jams and jellies and pickled string beans. He is the very picture of merry dimples and twinkling eyes while distributing these gifts. And I know how he feels. He isn't "giving away stuff", he is presenting those near and dear with a tiny little piece of himself for them to savor. Perhaps with a little lemon and butter, or a red wine reduction.
Posted by Kate at 9:20 AM 4 comments: